My turn!  I'm feeling a tad bit under the weather so I'm not drinking tonight so everyone else needs to drink for me.  I know you can do it (I'm lookin at you - Jen and Lisa) 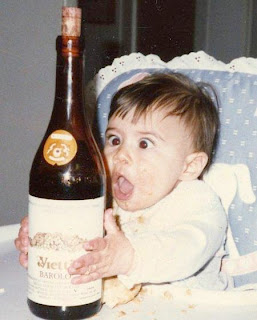 TwiredJen at six months old.
Mad Lib #1
Things Mom Always Said
These are some of the sexually frustrated phrases you might, unfortunately, remember hearing from your mother's Forks;
I guess when I'm older, I'll impart the same spry wisdom to my pumpkins.
Mad Lib #2
Case History:
Anger Management
Alexander the Great was a fuckable candidate for anger management, because he employed pancakes rather than diplomacy to solve problems.  Here are a few horny examples:
One can't help but wonder what scary as hell Alexander was so angry about - other than the fact that his parents were to sccchhhhweaty.  But what I would like to know is:  Once it became clear that young Alex had a flaccid chip on his pinky toe the size of a placemat, whose slippery idea was it to give him his own army?
Posted by mmMoxie at 8:30 PM

LOL. Nice way to start it off SV

Not much mox - currently in love with the hunger games.

I'm gonna have to check those books out

Why am I not surprised by that photo???

Thanks for working in "taints" DD

FUCK ME!!! Why does RL have to start at the EXACT same time as DML?!

HA! You remind people too! LOL! I thought it was just me. I'm like a fucking lion tamer sometimes trying to keep people on track. And the only reason I didn't answer #5 is cuz I already did an adjective. :P

good Lawd SV...answer as many as you want or we're gonna be here all night. *taps toe*

Maybe no one is drunk tonight.

sorry Jen. we already had Fooooorks so I'm gonna take penises for #7

YAY JEN!!!! I just got a text from TLR and she'll be here soon too!

all is ok in my world inotu :)

YES!!!! I finally managed to NOT enter my answer so frickin sloooowly - hey - good adjective!

No mice!!! 7am Sunday my little Otis had too much fun with his new squeak toy... a real live mouse in our bedroom!! Hubby caught it and released it outside...I am sure so it could come right back in. Arg

Eric Northman is hot from the neck down.

I had 2 "chapagne, citrus vokda, orange juice" thingys at my going away happy hour, as well as a beer and now some cheap champagne. This is all since 3pm, so believe it or not, I'M NOT DRUNK.

That is horrifying DD

@SV - I love the character of Jason. He makes the show for me.

Mox & SLV I guarantee he will GET HOT soon. I never thought he was...EVER, until season 2.

I lost my DML page...blogger comment window is still up...FML...

@Jen - I've seen all of the seasons. still not hot. SOrry.

Jen - I'm holding you to that! I just finished book one today. :) Book Eric AND Book Bill are WAY hotter than their counterparts in TrueBlood.

@DD: My cat used to be so proud when he would catch a mouse. One time there was one in our toaster and my cat was just sitting above it waiting. Eventually the mouse made a jump for it and jumped right into the cat's mouth. The cat was startled. Wasn't expecting that. It was pretty funny.

who you callin an asshole inotu? LOL

ok my lap top is being a douche...

LwE: condoms for the pumpkins?? Or are the condoms flavored with pumpkin???

Aww - late on the last one even! It's like when I answered everyone else did, but right after I'd go - NOBODY was paying attention. LMAO!!!

I said yes to a second one also Mox :)

@DD: I got the word from a halloween decoration on this one house I see on my way home from work. I will post it on my musings blog soon. It is this giant pumpkin bag thing that they put over this tall lantern thing and it looks like a giant pumpkin condom with a green tip. It is the most fallic holiday decoration I have ever seen.

So DD, hung with Team_sixpack the other night. wants to know when we can come visit.

@LwE I am both laughing and feeling horrified at the same time for this picture.

@ inotu - we should really set that up!!! That would be way cool. Maybe we should do a holiday gathering or something. Living with Edward, you, Team 6 pack and me and whoever else we find in the area!! Or the Eclipse DVD release!!

I am here, where are we?

@DD we are totally in. I could probably convice ForksPimp too.

@Mox - MusingBella and I were getting all excited about your visit next year. She's gonna take us to all the Portland movie sites and stuff.

Ok, I will post the pic here tonight. www.lwesrandommusings.blogspot.com

Wait. Team six pack and inotu are in our area??

@LWE we are both in Baltimore but would come north if invited...hint..hint

@ LwE I am sensing an invite being sent in the near future :)

@DD and inotu: yes!! That would be amazeballs!!

We should find something in between the 2 areas. Where is Forkspimp from?

@DD and LWE we will say yes!

Further south, almost DC. I cant remember the last time i was in philly

@Jen - i think your lap top is being super slow tonight.

LMAO this one is already starting to crack me up.

LOL it's ok inotu. I took your CAPS as enthusiasm

@mox thanx could be the wine

@TLR - Are you just looking around the house??? LOL!

@DD speaking of pinky toes...I ran mine into our wicker laundry basket this morning and took of part of my toe nail and it swelled up today :( I know it's not broken because I can bend it..but OUCH!

K. I'll post the finished product in two and two

Thanks for hosting Mox! You're the best! Mwah

I like to keep y'all guessin'! went with the first words that came to mind tonight...don't ask me where pancakes and placemat came from...I have no idea..>LOL

Someone is ready for breakfast at the dining room table :)

thanks Mox, sorry my puter was a douche!

I like #2. Pancakes is my favorite word used - so simple and so hilarious! LOL!!